Construction starts beginning the year lower across all major sectors

With only one, limited month of data available for 2020, it is difficult to ascribe a 2020 trend. Some perspective can be gleaned, however, by examining a 12-month moving total. For the 12 months ending January 2020, total construction starts were 1% higher than during the previous 12-month period. By major category, residential building starts were 1% lower and nonresidential building starts were down by less than a percentage point, but nonbuilding construction was 8% higher during the 12 months that ended in January 2020.

“Coming in slightly weaker than the previous month, January’s starts did little to change our view that construction starts will remain near their recent highs in 2020 even though they are likely to fall as the economy slows,” stated Richard Branch, Chief Economist of Dodge Data and Analytics.

Nonbuilding construction starts moved 2% lower in January, falling to a seasonally adjusted annual rate of $167.2 billion. In January, gains were seen in highways and bridges as well as miscellaneous nonbuilding categories, which moved up 15% and 12% respectively. Meanwhile, the utility/gas plant and the environmental public works sectors both pulled back, falling 29% and 10%. 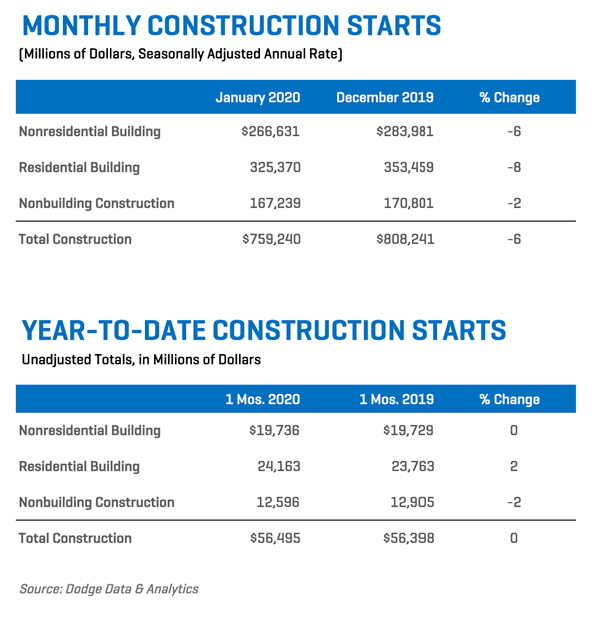 The largest nonresidential building project to break ground in January was the $475 million Cree Semiconductor plant in Marcy NY. Also starting was the $476 million BMO Office Tower in Chicago IL and the $400 million Husky Superior refinery in Superior WI.

On a twelve-month total basis, total nonresidential building starts were less than one percentage point lower than they were in the twelve months ending in January 2019. Commercial starts were 5% higher, while institutional starts fell 3% and manufacturing starts were down 10%.

The largest multifamily structure to break ground during in January was the $300 million Liberty on the River Apartment Tower in Philadelphia PA. Also starting in January was a $260 million mixed-used building on 10th Avenue in New York NY as well as the $249 million Downtown Fifth Luxury Apartments in Miami FL.

For the 12 months ending in January, total residential starts were 1% lower than the previous 12 months. Single family starts gained 1%, but multifamily building starts were 5% lower. 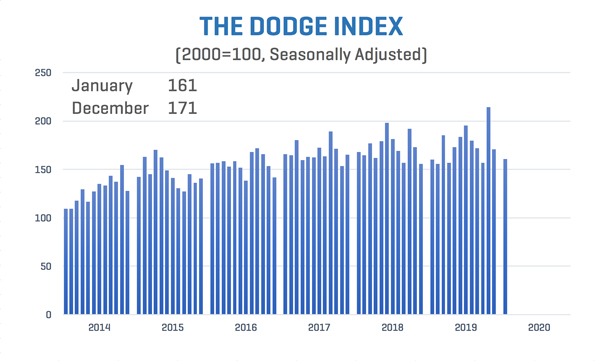