While use of remote inspection technology is still emerging in civil construction, studies show it delivers considerable value. One such study, conducted by the University of Kentucky Transportation Center with the Ken­tucky Transportation Cabinet (KYTC), tracked three e-construction technologies to collect data normally gathered by inspectors—e-ticketing, paver mounted thermal profilers and intelligent compaction. The outcome: e-ticketing delivered immediate benefits and, with improvements, the other two technologies can provide value to the inspection process.

About the Remote Inspection Study

KYTC was interested in participating in the study in part because the number of their inspectors had dwindled over time and they saw the poten­tial for remote inspection to address gaps caused by those reduced resources. Ryan Griffith, former director of construction at KYTC, believed e-ticketing could help his inspectors focus on more high-value tasks, such as “watch­ing the mat go down, checking the depths, check­ing the yield on the pavement and more important things that we couldn’t measure electronically.”

Roy Sturgill, assis­tant professor at Iowa State University and one of the study’s researchers, felt Kentucky was a good candidate for participation because they were already using the paver mounted thermal profilers and intelligent com­paction. Sturgill and Griffith con­cluded that “if we couple intelligent compaction, the paver system and e-ticketing, you can get most of what your inspector is going to do on a resur­facing project.”

According to Sturgill, the study’s data showed that “e-ticketing was a no-brainer.” He also saw promise in the use of the other two technolo­gies, but more value could be derived by addressing usage challenges.

E-ticketing had its own set of challenges at the start. For one, while KYTC contracts directly with paving companies, it does not have a con­tract with the truck drivers delivering the mate­rial. According to Griffith, this caused some initial concern about who was responsible to supply the equipment and if there were privacy con­cerns as the trucks were installed with GPS track­ers. Privacy ended up not being a major issue in the pilots, and both Griffith and Stur­gill credit KYTC’s transparency of its goals for the pilot and how it planned to use the data.

“To me, that was a huge lesson learned: talk to your contracting community and let them know what’s going on, how you’re using the data,” shared Sturgill.

In fact, Brian Billings, vice president of ATS Construction, reports, “Our truck subcontractor, they were very cooper­ative. They actually really liked the technology and were even able to use it after the project.” Rather, ATS had the bigger chal­lenge of upgrading hardware and software at the plant in order to support e-ticketing. Nevertheless, according to Billings, “The $3,000 we had to pay to upgrade and get the software installed was pennies compared to the overall project amount.”

The first noticeable benefit to ATS Construction was the ability to use the e-tracking system data to improve productivity.

“We do our best on a day-to-day basis to manage how many trucks we need, or if the trucks are late, or if the plant is not producing asphalt or if there is downtime with the crew working in the field, or vice versa,” shared Billings. Using the data, they were able to improve visibility into all these issues.

In fact, ATS realized from the data that “we have an undersized plant for the amount of work that we try to do, and we learned through this project how much downtime [that creates] for the person in the field versus having a big enough plant to serve that crew … we could clearly see where the trucks sat the longest, and we were able to determine where we were having a backup or inefficiency in our pro­duction.”

Billings was surprised at how easy it was to track the information with the e-ticketing system. “If you pulled it up at any point through­out the day, you could tell where a load of asphalt was at. You could tell how much material had been loaded out … Our inspector, our foreman and people like myself who sit behind a computer, we were all looking at the same information in real time.”

Griffith, from KYTC’s perspective, also saw great value in the real-time data, and in being able to access tickets at any time. “Normally, if you wanted to see how many times we are late or what material was late, you would go back to the office and dig those out. Now we can log in any­where [and get specific data, such as tons of surface or tons of base].”

Another benefit Griffith reports is the ability to track the yield. “We know a truck should go three hundred feet, and that is what our inspec­tor does, makes sure they are not laying too deep or too thin … [When] you build a geofence around your paver, we know [when the truck backs in and when it pulls out of that geofence], so we can measure how many feet it went and can track yield remotely.”

In addition, both Griffith and Bill­ings commented on improved safety. With simple inspection tasks done remotely, fewer inspectors need to be at risk on the site. According to Billings, “Paving is fast moving, it’s dynamic. Trucks are backing in, there are traf­fic hazards. Anything you can do to have one less person in that environment improves safety.”

The findings of the study for intelligent compaction and paver mounted thermal profilers sug­gested improved preparation is needed to avoid inconsistent data. Stur­gill explains, “[The tech­nologies] have a lot of promise, but they have to be set up correctly, which requires train­ing and understanding of the technology.”

Despite these initial challenges, Griffith sees great potential for remote inspection in the future. The combination of e-tick­eting data, temperature measurements, and the intelligent compaction offers the opportunity for process improve­ments and improved future performance.

Having this data “opens up possibilities to monitor our pavement and its durability and the future of it.”

For example, Griffith imagines a scenario where the asphalt mix is slightly different in loads 25 through 50 than in the prior 24. “We get 10 years down the road, we know exactly where each load was put, and we start to see fail­ure in a certain area. [We can look at this data and determine that this section was paved with] loads 25 through 50. We can say that mix was not a good idea: It didn’t work well for durability. [Or if another area fails we can] look at the rolling and see that was one little patch that didn’t get rolled five times. It only got rolled four.”

Learn more about Remote Inspection Technology use and trends during our March 24, 2021 webinar. Register now! 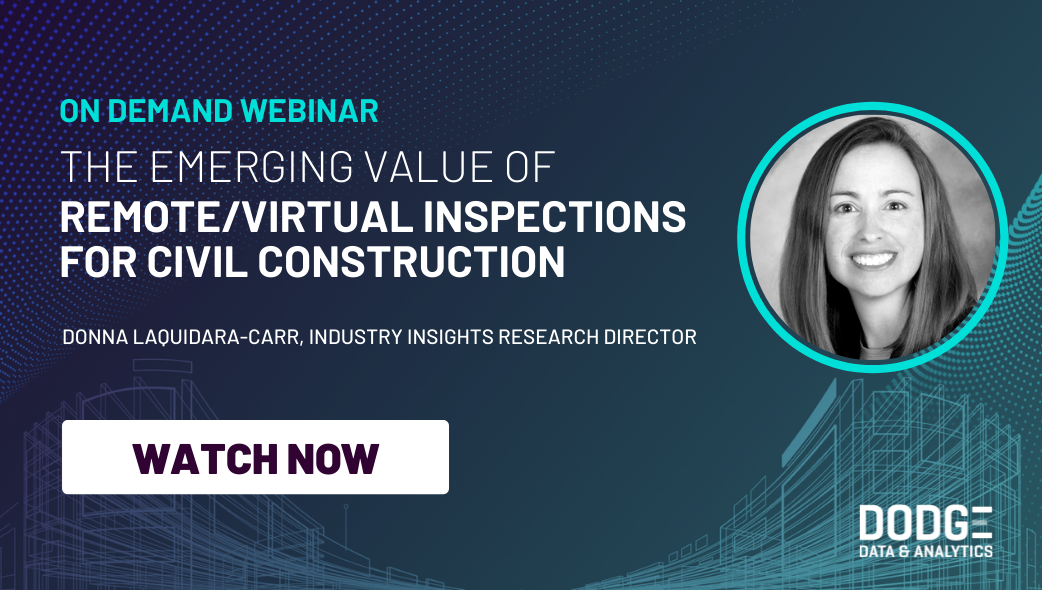