Big is In: Warehouse Starts Increase in Number and Size

Written by Kim Kennedy, Director of Forecasting for Dodge Data & Analytics on March 15, 2019

The number and size of commercial warehouses breaking ground has soared in the current economic expansion – and the energy behind the upsurge has largely come from online shopping, or e-commerce. Retail sales via online shopping bypasses brick and mortar retail establishments but requires large and highly sophisticated distribution centers to ensure quick and reliable product deliveries. This has created a need for construction of new, larger and technologically advanced warehouses and distribution centers – making million square foot and larger warehouses a growing phenomenon in the market. 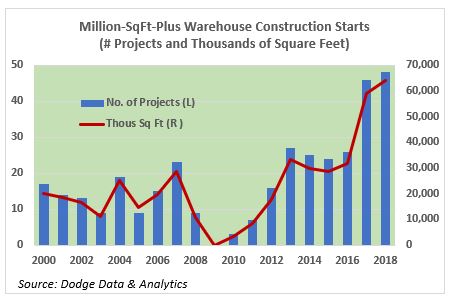 During the current economic expansion, total warehouse construction starts increased from a 2010 low of just 49 million square feet (msf) following the Great Recession to just under 300 msf in 2017. And while starts pulled back slightly to a preliminary estimate of 283 msf in 2018, the size of commercial warehouses continued to grow last year.

At the height of the last expansion in 2007, the number of groundbreakings for commercial warehouses with at least a million square feet peaked at 23 projects that had a combined square footage of 28.8 msf, or 11% of total warehouse starts. During the past two years, however, those numbers have doubled. In 2017, an unprecedented 46 warehouse projects of one million square feet or more broke ground and in 2018 that figure increased to 48. The aggregate square footage of these large projects totaled 59.0 msf in 2017 and 64.1 msf in 2018. These massive warehouses accounted for a fifth of total square footage started in 2017 and a record 23% in 2018.

Although starts from traditional brick and mortar retail companies establishing or increasing their online capabilities have been a measurable reason for the growth in warehouse starts, many of the largest warehouse starts over the past few years have come from online-only retailer, Amazon. Amazon went on a construction spree in 2017, breaking ground on at least 44 warehouse projects that added a combined 26.4 msf of new space to the warehouse market. Of these, an estimated 11 projects (a combined 11.3 msf) were a million square feet or more. In 2018, Amazon continued to be a major player in warehouse development. Amazon started fewer, but larger projects: a total of 23 projects over the year for an additional 23.5 msf. Of these, the same number as in 2017 (11) were at least a million square feet, but the total square footage added by these projects was 17.8 msf. In fact, the four largest warehouse projects breaking ground in 2018 were all Amazon distribution centers that were more than 2 msf: a 2.68 msf Project Axis Distribution Center in Garner NC, a 2.6 msf Project Rose Fulfillment Center in Spokane WA, a 2.4 msf Project Dylan Fulfillment Center in Tulsa OK, and a 2.31 msf Fulfillment Center in Bessemer AL. Without online retailer Amazon, the commercial warehouse construction market would look very different today.

Amazon’s impressive expansion becomes even more apparent when compared to construction undertaken by other notable retailers. Walmart, the nation’s largest brick and mortar retailer, broke ground on only four warehouse projects in 2017, which in aggregate accounted for just 4.7 msf. Of these projects, two were more than a million square feet including a 2.6 msf warehouse in Irving AL and a 1.3 msf warehouse in its hometown of Bentonville AR. In 2018, Walmart undertook five projects, but they were almost entirely alterations to existing buildings that added no new square footage to the market. Other than Walmart, no other retailer has broken ground on a series of warehouses since the current recovery began. The dollar stores – Dollar General (3) and Dollar Tree (4) – have each built multiple million square foot warehouses over the course of the recovery, but nothing to compare with Amazon’s spree.

In January 2019, four warehouse projects with at least a million square feet of space broke ground, a strong beginning for the year. The Dodge planning database contains a dozen or more of these projects with strong potential to start in 2019. Among them are a 3.35 msf Amazon Air Hub in Hebron KY and three Walmart distribution centers (in Shafter CA at 1.75 msf, in Thomasville GA at 1.55 msf, and in Plainfield NY at 1.1 msf). While warehouse starts are likely to see modest declines this year as the construction market (and overall economy) round the cyclical peak, large projects will nevertheless remain a key part of the mix.

Need custom market research? Click here to learn more about how Dodge can help you achieve your goals.