Employment Gains Continue, But at a Slower Pace in July

By Kim Kennedy, Director of Forecasting for Dodge Data & Analytics

This month’s jobs report, while showing improvement, paints a picture of the U.S. economy where the glass is half empty. The economy added 1.8 million nonagricultural jobs in July, which would be a tremendous gain under normal circumstances. But current conditions are far from normal. The month’s progress, in fact, was far smaller than the 4.8 million increase in June or the 2.7 million in May as cases of coronavirus surged in the South. And the total number of nonagricultural jobs in the U.S. remains 12.9 million (8.4%) below where it was in February of this year, just before efforts to contain the COVID-19 virus shut down the economy. 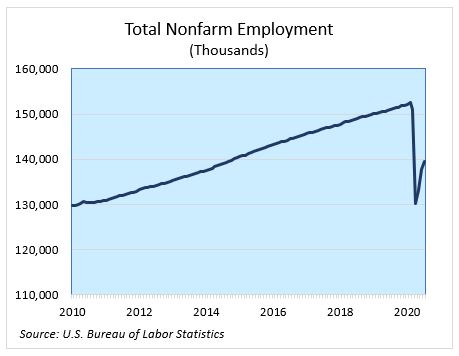 The unemployment rate also fell by an outsized 0.9 percentage points in July to 10.2%, down from 11.1% in June and 13.3% in May. In February, however, just before the virus was declared a pandemic, the unemployment rate had dropped to a 50-year low of 3.5%. The number of unemployed persons fell by 1.4 million over the month to 16.3 million but remains 10.6 million above February’s level. The number of people who were temporarily laid off decreased by 1.3 million in July to 9.2 million, which means that about half of those temporarily laid off in April have returned to work as the economy has reopened. Unfortunately, the number of people who have permanently lost their jobs was virtually unchanged over the month and the increase in caseloads across the South has raised concerns about possible new closures.

By industry, leisure and hospitality was responsible for almost a third of the gain in total nonfarm employment with an increase of 592,000 jobs. Employment in food services and drinking places rose by 502,000 jobs, after a combined increase of 2.9 million in May and June. But employment in food services and drinking places is still 2.6 million jobs below where it was in February. Retail trade also added 258,000 jobs in July although the industry had 913,000 fewer jobs than in February. Professional and business service jobs also came in 1.6 million below February even though 170,000 jobs were added in July — and 144,000 of those jobs were in temporary help services, rather than permanent positions. Even healthcare employment was down by 797,000 compared to February, despite the 126,000 jobs that were added in July. For the construction sector, employment changed little in July (up just 20,000 jobs), following combined job gains of 619,000 in May and June. Residential construction was entirely responsible for the month’s gain. And total construction employment remains 444,000 below its February level.

While improvement in the labor market continued in July, advances slowed from the months of May and June.  With so many jobs still needed to close the gap between pre- and post-COVID-19 levels of activity, it’s hard not to see the glass as half empty.