Employment Growth Continues, But at a Slowing Pace

By Kim Kennedy, Director of Forecasting

Payroll employment grew by 164,000 in July, following a downwardly revised increase of 193,000 in June. This month’s increase indicates that employment and the overall economy continue to grow even if the pace has slowed from last year and even though the economy has now been expanding for a decade. After increasing at a monthly rate of 223,000 in all of 2018, job growth slowed to 165,000 per month in the first seven months of 2019 and slowed further to just 140,000 in the most recent three months. Despite the slowing pace of growth, the unemployment rate remained steady at 3.7% in July. Even July’s wage growth, which has been particularly soft over the long stretch of the recovery, rose by a healthy 3.2% from a year earlier. 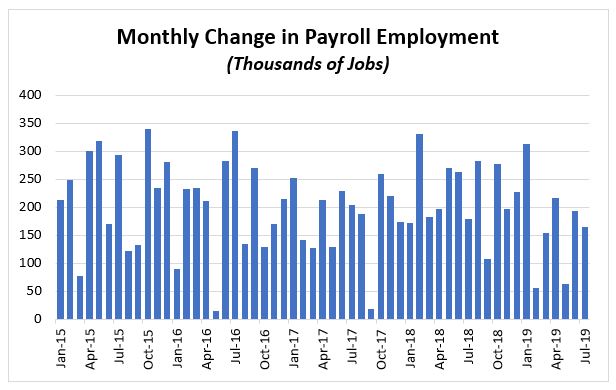 July’s employment growth was broad-based, with many industries showing gains. The service-producing sector dominated July gains with an increase of 133,000 jobs. Goods-producing industries gained just 15,000 and government grew by 16,000. Within services, the large education and healthcare sector advanced by a strong 66,000 jobs and professional/business services rose by 38,000.

Within the goods-producing sector, manufacturing gained 16,000 jobs as the motor vehicle and parts industry saw employment grow by a healthy 7,200 after a modest dip in June. At the same time, construction was only able to add 4,000 jobs in July after a more ambitious 18,000 gain in June. Within construction, the improvement came from specialty trades contractors, where employment rose by 7,400. Employment in residential building gained 1,400 and nonresidential building remained little changed, but heavy/civil engineering construction fell by 4,300 jobs.

The consensus believes this was a solid jobs report, signaling that the economy still has life left in it, but within the report were suggestions that the economy is slowing over and above the general slowdown in job growth. The average workweek declined (manufacturing has cut back overtime) and total hours have flattened in 2019. These cautionary indicators may be behind the Federal Reserve’s move to drop interest rates by a quarter percent earlier this week. The Fed cited a slowing global economy and a desire to shore up domestic growth as its reasons for the dip in interest rates. Uncertainty about trade policy is also giving the Fed cause for concern. In fact, Wall Street expects the Fed to continue lowering rates at its next meeting in September. While most don’t expect this jobs report to have much effect on the Fed’s rate decision, the administration’s decision to increase tariffs on Chinese imports may be more impactful.