Employment Growth Picks Up in February

BEDFORD, MA -- MARCH 5, 2021 -- New cases of COVID-19 began to decline in February after the winter surge and the economy responded positively by adding a healthy 379,000 jobs during the month and allowing the unemployment rate to slip to 6.2%. The easing of COVID-19 restrictions encouraged job growth in sectors hit hardest by the pandemic. Leisure and hospitality, for example, added 355,000 jobs in February with most of those jobs (286,000) coming from restaurants and bars. Retail jobs climbed by a smaller 41,000 and healthcare service employment, in high demand with the pandemic, increased by almost 46,000. Temporary jobs, which are typically a leading indicator for overall job growth, also rose by 57,000 over the month. 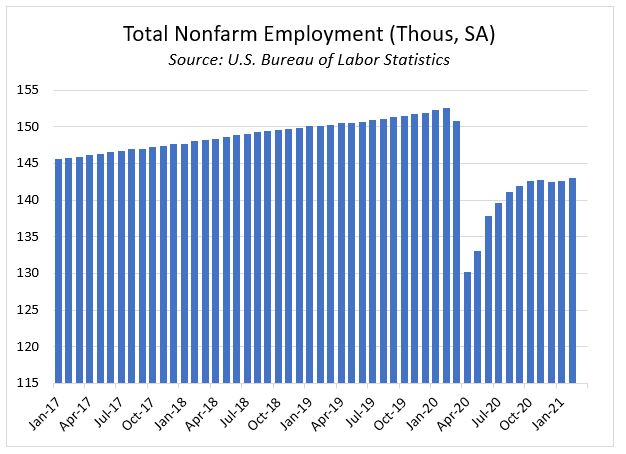 Construction employment, by contrast, fell by 61,000 in February. Specialty trade contractors lost 42,000 jobs and heavy/civil engineering jobs were down by 21,000, but the stalwart residential sector still added 5,000 jobs over the month.

Private sector jobs increased by 465,000 in February, but government jobs continued to feel the squeeze from the loss of tax revenue and high cost of responding to the pandemic. Government jobs declined by 86,000 in February with most of those losses coming from state (39,000) and local (44,000) governments.

Looking ahead, Dodge believes that employment will continue to grow, particularly as the economy picks up steam in the second half of the year. The president is promising plentiful COVID-19 vaccines for Americans by the end of May, which should usher in the beginnings of a true recovery.