Total nonfarm payrolls rose by 661,000 in September as momentum in the labor market eased following gains of 1.8 million in July and 1.5 million in August. Public sector employment shrank by 216,000 largely due to cuts in local government education payrolls. Private sector employment increased by 877,000 led by 318,000 jobs in leisure/hospitality, 142,400 in retail, and 73,600 in transportation and warehousing. The unemployment rate fell to 7.9% as 700,000 workers left the labor force. 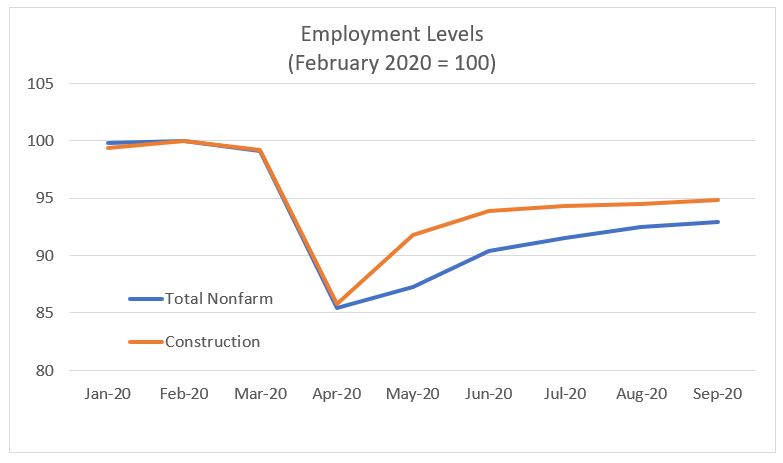 The construction sector gained 26,000 positions during the month. Employment for specialty trade contractors rose by 17,600 while heavy and civil engineering jobs were cut by 3,400. This is the third consecutive month of losses for civil employment, perhaps a further sign that the budget crisis facing state and local governments is affecting nonbuilding construction activity. Building construction positions rose by 11,900 with nearly equivalent gains seen in residential and nonresidential jobs. In total, the construction sector has added back close to two thirds of all the jobs lost in March and April.

While not a step back for the labor market per se, this below-expectation jobs report highlights that the economic recovery is losing momentum and that significant risk exists that the economy could backslide as fears mount over rising COVID-19 cases with little hope for additional federal fiscal stimulus in the near-term. In conjunction with still very high initial claims in unemployment insurance and weak personal income growth, this month’s jobs report strongly suggests that the economy will be moving sideways as the year comes to an end. Dodge expects construction markets to do the same. Except for single family and warehousing, most construction categories are seeing little gain in activity. Until a vaccine is available and being distributed, we’re likely to continue to see unsteady improvements in the economy and construction through the latter half of next year.