It’s not news that the retail industry has been under a great deal of stress in recent years as online shopping pockets an ever-increasing share of consumer spending. New construction data from Dodge Data & Analytics show that even the giants of retail are not immune to this stress. Although Walmart spent roughly $1 billion in 2018 on new construction, additions, and renovations, that level of spending was down 11% from 2017 – and 2017 was down 18% from the previous year. Despite the declines, Walmart still outspent second-place Aldi’s Food Store by three-to-one last year.

Not all of the largest retailers lowered construction over the past year, however. Competitive pressures still kept some in expansion mode, or at least in renovation mode. Second-place Aldi’s, for example, grew construction starts by 2% in 2018 to $311 million following a 77% surge in 2017. Third-place Target has also been on a construction spree with increases of 183% in 2016, 52% in 2017, and another 19% in 2018 which brought the total dollar value of starts to $229 million. 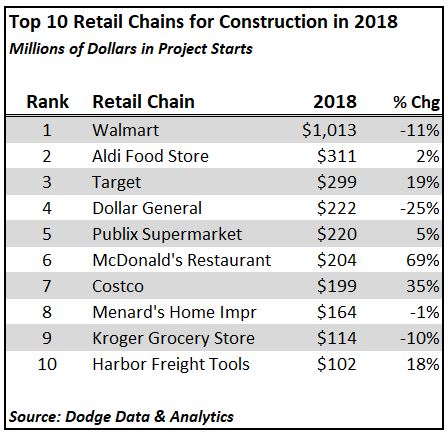 Given the size of the stores, it’s not surprising that the big box retailers were well-represented among 2018’s 20 largest spenders for retail construction. Seventh-place Costco joined Walmart and Target among the top 20. Four supermarket chains were also on the list: Aldi (#2), Publix (#5), Kroger (#9), and new to the U.S., Lidl (#17). Two home improvement/hardware stores were also among the top 20: Menard’s and Harbor Freight Tools, which brags of opening a new store every three days. Not all of the top 20, however, have massive store footprints: three fast food restaurants were on the list (McDonald’s, Chick-Fil-A, and Taco Bell), as well as two dollar stores and two auto parts dealers. And for those of us addicted to our morning coffee, it’s noteworthy that Starbucks will soon be on even more street corners – it placed #14 among the top retail chains for construction starts in 2018.