As widely expected, U.S. Gross Domestic Product shot higher in the third quarter, increasing at an annualized 33.1% — the largest quarterly increase in GDP since 1947 when quarterly figures were first tracked. The increase follows a sharp 31.4% contraction in economic output during the second quarter and a 5.0% drop in the first quarter. 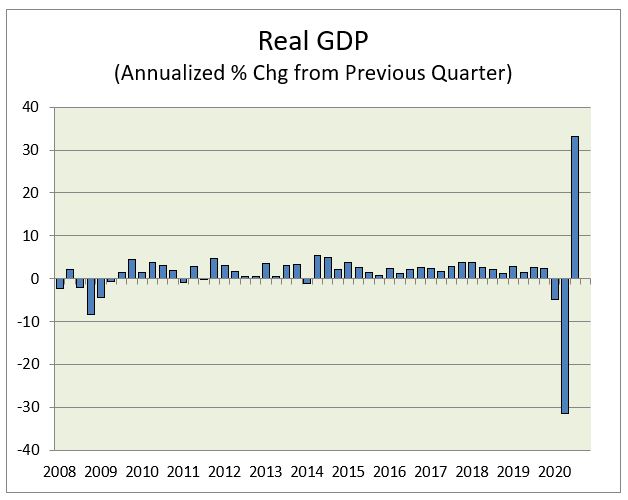 Third quarter gains were widespread. Consumer spending was robust, with large increases for both goods and services as pandemic restrictions were lifted. Business investment also moved significantly higher driven by spending on equipment, while investment in nonresidential structures posted a notable decline — its third consecutive quarterly drop. Residential investment also moved higher in the quarter. On the downside, government spending contracted, driven by weaker spending at both the federal and state and local levels.

The third quarter bounce back reflects the initial round of businesses reopening and rehiring as pandemic restrictions were lifted over the summer. It does not, however, mean that the economy has returned to pre-pandemic levels of activity and regained its full health. With today’s report, the economy has recovered only two-thirds of the output lost in the first half of the year. Moving forward, the economy still faces significant hurdles including the next wave of COVID-19, election uncertainty, and diminished hope in the near-term for additional federal stimulus. Expect economic growth to move sideways in the fourth quarter and into early next year.