Job Growth Bounces Back in April

BEDFORD, MA – May 3, 2019 – The job market seems to have bounced back in April after having experienced a mild case of the flu in February and only partial recovery in March. The number of payroll jobs grew by 263,000 in April after gaining just 56,000 in February and 189,000 in March. With this stronger gain in employment, the April unemployment rate slid to 3.6%, the lowest level in 50 years. Given its advanced age (the job market is now in its 10th year of expansion), the health of the labor market continues to surprise. 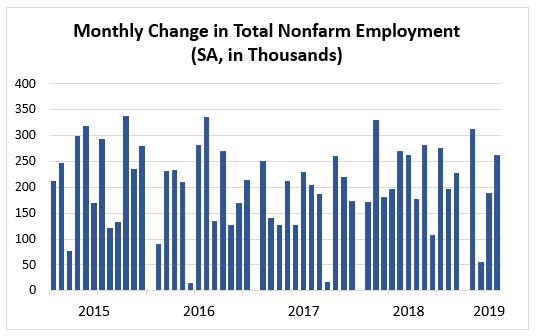 The heart of this month’s growth came from professional/business services (up by 76,000 jobs), healthcare (up 53,000), and hospitality (up 34,000). Construction payrolls also boosted job growth by a robust 33,000 in April. At the other extreme, the retail sector lost 12,000 jobs in April, continuing its downward slide.

With a decline in the labor force during April, the labor force participation rate (the share of the 16+ population either employed or looking for a job) slipped to 62.8% – the same as a year earlier, but down from 63.0% in March and 63.2% in the first two months of the year. On the positive side, the participation rate remains above the low of 62.4% reached in September 2015.

The gains in average hourly earnings have also slowed in 2019 despite the very low unemployment rate and tightening labor market. In April, earnings rose 0.2% following increases of just 0.1% in March and January.  Only February’s 0.4% gain matched levels seen near the end of 2018. Still, in the first four months of 2019, private sector wages were up 3.3% from a year earlier, much stronger than seen in prior years of the recovery. Construction wages have performed about average in 2019. Although April wages gained a stronger 0.4% over the month, construction wages were up 3.2% in the first four months of the year.

Overall, the April jobs report contained good news for the U.S. economy. It suggests that the first quarter’s ills were perhaps temporary, rather than a sign that the job market, and the entire U.S. economy, have reached the end of their lifecycle as recession nears.  Even though it’s no longer a bounding pup, there may be some life in the old dog yet.