BEDFORD, MA – November 9, 2020 – With the threat of COVID-19 still looming, the U.S. economy made modest progress in October as employers added 638,000 jobs to payrolls. The economy has now recovered a little more than half of the 22 million jobs lost as the economy shut down in March and April to prevent the spread of COVID-19. But gains have slowed since the early months of reopening: nonfarm employment grew at its strongest pace of 4.8 million jobs in June, but then began to slow with just 1.8 million jobs added in July and 1.5 million in August followed by a slower 672,000 in September and 638,000 in October. October’s job growth, however, may have been a little stronger if not for 147,000 temporary Census workers whose jobs ended in October. The private sector added 906,000 jobs in October, while governments shed 268,000. 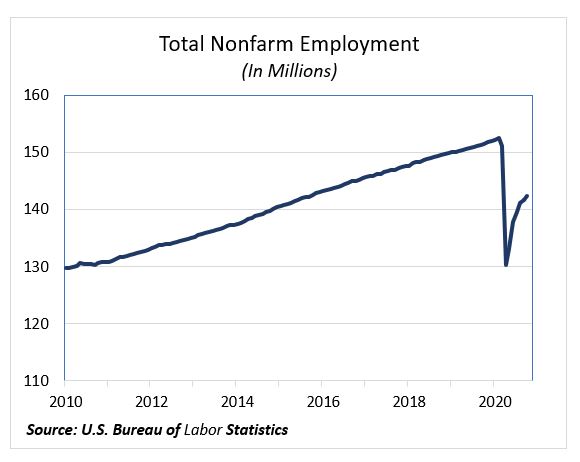 Some of the strongest jobs gains in October came from the retail and leisure/hospitality sectors that were hardest hit by the downturn. In October, retailers added back 104,000 jobs and leisure/hospitality added back 271,000. These sectors, however, face the greatest perils as the winter months approach given the likely resurgence of the virus and softening economic growth as further federal stimulus efforts fail to materialize.
Construction employment grew by 84,000 in October, led by gains in specialty trade contractors (up 45,300). Heavy/civil engineering jobs grew by 18,800, while nonresidential jobs were up 13,400 and residential by a smaller 6,000.

October’s unemployment rate also fell by a full percentage point to 6.9%. More recently, Wall Street rallied last week with the strongest stock market gains since April. Most importantly, with the presidential election now decided, that uncertainty is now behind us and should lead to a stronger outlook for the months ahead. Here’s to a glass that continues to look half full.