NEW JERSEY – DECEMBER 4, 2020 – According to the Bureau of Labor Statistics, the U.S. economy added 245,000 jobs in November – a considerable step back from the revised 610,000 jobs added in October. Still, the unemployment rate dipped to 6.7%. Private sector employment improved by 344,000, while the public sector shed 99,000 positions. Within the public sector, state and local governments cut 13,000 positions, while federal employment was down 86,000 reflecting the loss of temporary workers that had been hired for the 2020 Census. 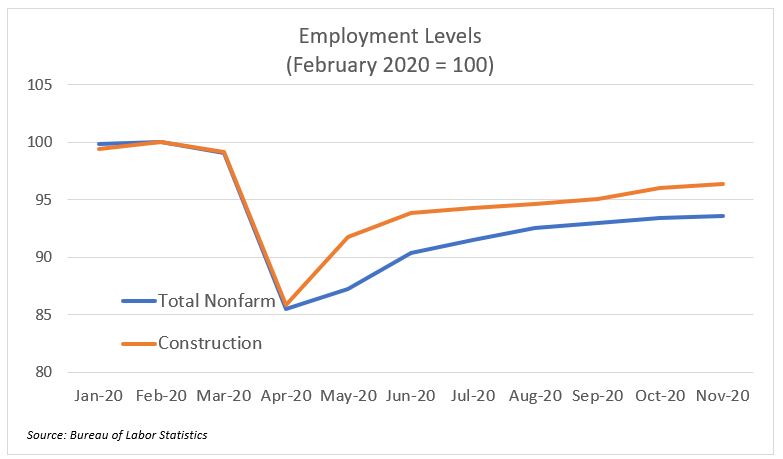 Employment growth in the construction sector also lost steam in November, adding 27,000 positions, down from the 72,000 added in the previous month. Gains were seen in residential and nonresidential building, heavy and civil engineering as well as in residential specialty trade contractors. Nonresidential specialty trade contractors cut 1,200 positions. The construction sector has now added back nearly 80% of the jobs lost during March and April, while total nonfarm employment has added back just under 60% of the jobs lost.

Economic growth has slowed noticeably over the past several months and the labor market is beginning to stagnate as a result. There should nevertheless be some solace that employment growth was as strong as it was in November, given the considerable headwinds facing the economy. The next wave of the virus is accelerating and the prospects for additional federal stimulus are still very uncertain, so employment growth is expected to slow further in the months to come. Construction employment should remain somewhat resilient, however, due to the booming housing market. Looking into 2021, the hope for rapid deployment of a vaccine sets the table for a stronger economic recovery taking hold by the midpoint of the year.