The Bureau of Economic Analysis reported today that the U.S. economy contracted at a 32.9% annualized pace in the second quarter. This is the sharpest quarterly decline in GDP going back to 1947 when quarterly figures were first tracked. This was largely in line with our expectation of an annualized 33.4% contraction. 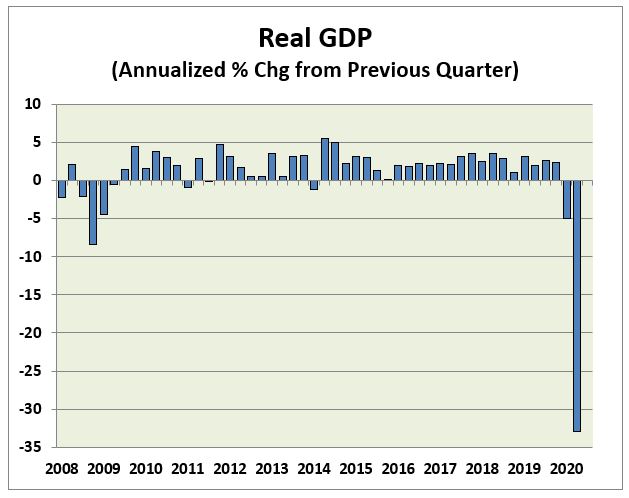 Declines in consumer spending and business investment were dramatic in the April to June quarter, although there was a slight uptick in business investment in computer equipment, perhaps as firms outfitted their employees for an extended out-of-office work schedule.

On the plus side, government spending provided a mild boost in the quarter as federal nondefense spending accelerated. State and local expenditures fell, however, as they came to grip with rapidly declining tax revenues and higher costs associated with COVID-19 preparations.

Today’s report does little to change our viewpoint that the U.S. economy is in recovery mode following the sharp contractions in March and April. Business activity has certainly picked up as the reopening process began, leading to job gains in both May and June. However, the nascent recovery is at risk as the number of COVID cases continues to climb.

In a separate report today the number of initial claims for unemployment insurance (UI) rose to 1.434 million – the second consecutive weekly increase. Should states and local areas add restrictions in an effort to quell the virus the number of workers seeking aid will surely rise. As the expanded UI benefits provided under the CARES Act are set to expire, with an uncertain outlook for their renewal, this will limit the consumer’s ability to fully contribute to growth and lead to a slowing economy in the coming months.