BEDFORD, MA - April 26, 2019 - The U.S. economy grew at a surprisingly strong 3.2% in this year’s first quarter, according to the initial estimate from the Bureau of Economic Analysis.  Last year had seen deceleration in the rate of GDP growth, sliding from 4.2% in the second quarter to 2.2% in the fourth quarter, and for various reasons it was believed that growth for this year’s first quarter would continue that decelerating trend.  These reasons included the partial government shutdown, harsh winter weather, and the waning benefits from the 2018 tax cuts. 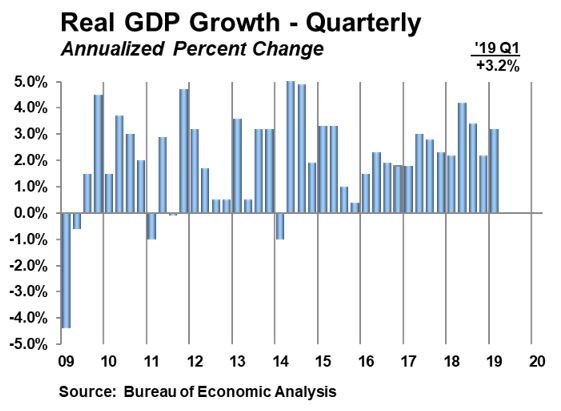 The first quarter GDP reading was boosted by several factors.  Inventory investment by firms contributed 0.7% to the top-line GDP gain, compared to just 0.1% in the fourth quarter.  Exports in the first quarter advanced 3.7%, while imports (for which increases count as a subtraction to GDP) fell 3.7%.  And, state and local government spending registered a 3.9% hike in the first quarter, which was its strongest quarterly increase in the past three years.

On balance, despite the healthy 3.2% gain in the first quarter, the most recent GDP report remains consistent with the sense that the U.S. economy is decelerating from the 2.9% rate of growth reported for 2018 as a whole.  The first quarter lift coming from firms building up inventories is not likely to be repeated, and the same holds true for the lift coming from net exports as well as state and local government spending.  Furthermore, the subdued readings for nonresidential fixed investment in structures and residential fixed investment are consistent with the picture of a construction expansion that at the very least is now in the process of leveling off.