According to the most recent report from the Bureau of Labor Statistics (BLS), non-farm payrolls added a whopping 304,000 jobs in the first month of 2019. This mark greatly exceeded the consensus estimate of 165,000 from Economists surveyed by Bloomberg. In the face of the longest government shutdown in U.S. history and general trepidation that the current U.S. expansion could be nearing an end, private-sector hiring remained steadfast and robust. In fact, the few discernable effects of the government shutdown were a slight rise in the January unemployment rate from 3.9% to 4.0%, and the number of temporary layoffs from the household survey rose by 175,000 (the majority of which were furloughed government workers). Separately, average hourly earnings for all private nonfarm employees rose by 3 cents, a 3.2% year-over-year increase. While wages did increase, wage growth decelerated from a 10-cent increase in December. 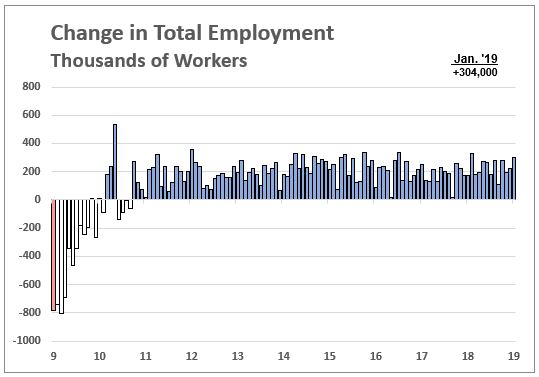 As always, some expected revisions were evident in the monthly data. Total nonfarm payrolls were boosted by 20,000 in November (to 196,000) and lowered by 90,000 in December (to 222,000). Even after those revisions, the 3-month average for job gains sits firmly at 241,000 per month. This number lends confidence to the general narrative that the U.S. labor market remains healthy. Touching on a few specifics, the leisure/hospitality (+74,000), education/health services (+55,000), and construction (+52,000) sectors all performed admirably posting more than 50,000 new jobs each. The transportation/warehousing and retail trade sectors experienced solid advances after seeing losses in December.  The largest negative from this month’s release was a slowdown in manufacturing payroll growth, which posted a five-month low for new hiring in January (+13,000).

The strength of the BLS’ recent monthly employment estimates should provide assurance of the current strength in the U.S. job market. Looking forward, however, some downside risks to the economy could pose problems for the labor market. The threat of another government shutdown, continued trade tensions with China, the threat of new tariffs on the already softening manufacturing sector, and the effect of political unease on consumer confidence are all whispers of concern that can be heard across the nation. So far, the whispers are just that, whispers.