Manufacturing and infrastructure projects lead large gains during the month

“December starts revealed where the current strength in the construction lies: manufacturing and infrastructure,” said Richard Branch, chief economist for Dodge Construction Network. “It is those segments that will provide insulation for the sector as the economy softens in 2023. Recession or not, higher interest rates will weigh on the economy and restrain construction starts in 2023. However, it’s encouraging to know that the new year is starting with a great deal of positive momentum.”

●      Nonresidential building starts gained 51% in December to a seasonally adjusted annual rate of $549.6 billion due to numerous large manufacturing projects getting underway. In December, manufacturing starts rose 596% from November to December. Institutional starts gained 11% with all subcategories improving. Commercial starts, however, fell 10% in December due to a pullback in office and hotel starts. For the full year, nonresidential construction rose 38% from 2021. Manufacturing construction activity led all gains, rising 185% over the year. Commercial starts were 25% higher in 2022, led by office and hotel activity, while warehouse and retail starts increased at a modest pace. Institutional starts were 19% higher in 2022, led by improvements in healthcare and education starts.

The largest nonresidential building projects to break ground in December were the $8.5 billion Golden Triangle Ethylene Cracker in Orange, TX, the $2 billion AltAir/World Energy renewable fuels facility in Paramount, CA, and the $1.4 billion Stellantis electric vehicle plant in Kokomo, IN.

The largest multifamily structures to break ground in December were the $350 million first phase of the Hamilton Green complex in White Plains, NY, a $240 million mixed-use project on Dekalb Ave in Brooklyn, NY, and the $230 million 54 Crown Street building in Crown Heights, NY. 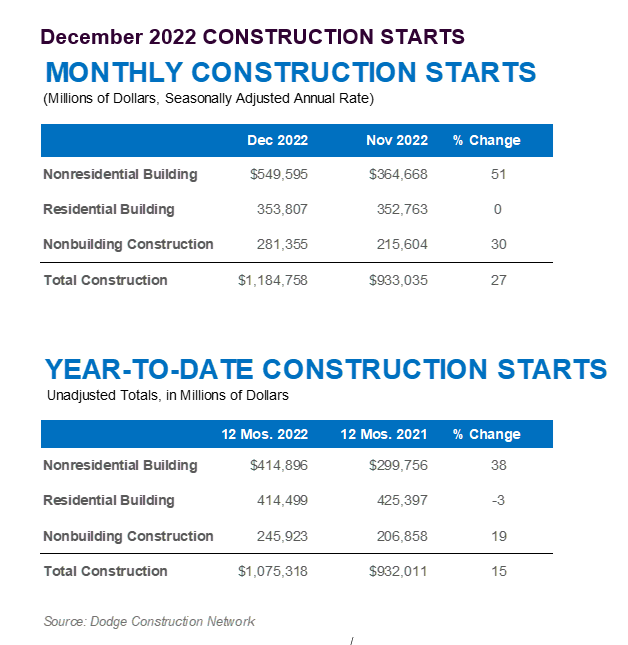 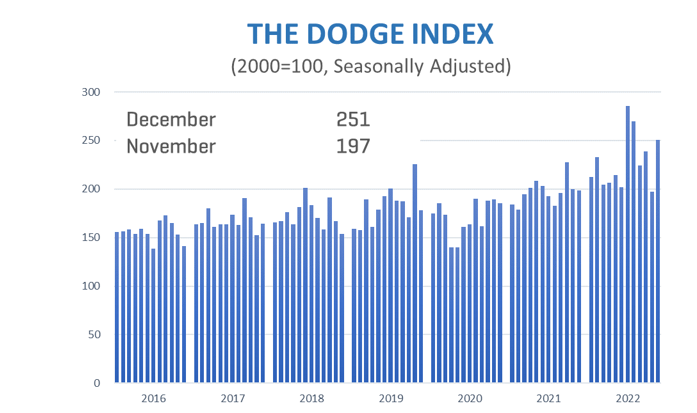