“Construction starts have hit a rough patch following the euphoria seen in the early stages of recovery from the pandemic,” stated Richard Branch, Chief Economist for Dodge Data & Analytics. “The Delta variant has raised concern that the fledgling economic recovery is stalling out, undermining the already low level of demand for most types of nonresidential buildings. Additionally, significant price increases for construction materials, logistic constraints, and labor shortages are making a challenging situation worse. Construction starts are likely to remain unsteady over the next few months. However, the dollar value of projects entering planning continues to suggest that the recovery in construction starts should resume early in the new year.”

The largest nonbuilding projects to break ground in August were the $677 million Oak Hill Parkway roadway in Austin, TX, the $351 million southern expansion of the Kansas City Streetcar system in Kansas City, MO, and the $300 million first phase of the Dunns Bridge Solar Project in Wheatfield Township, IN. 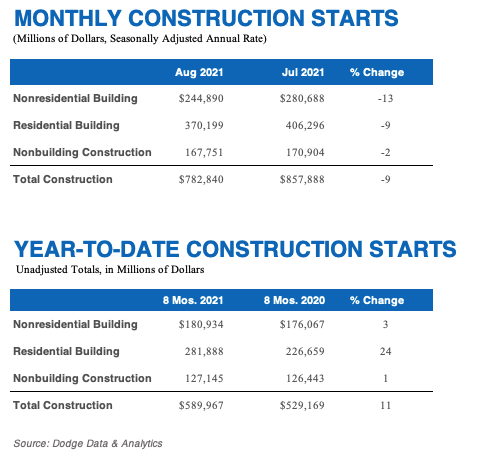