NEW YORK--(BUSINESS WIRE)--New construction starts dropped 6% over the month in August to a seasonally adjusted annual rate of $807.1 billion, according to Dodge Data & Analytics. August’s decline breaks a string of three consecutive month-to-month gains. By major sector, nonbuilding construction fell 15% in August, reversing the large increases made in the previous month when several notable projects started. The declines in residential and nonresidential building were milder – falling 1% and 3% respectively in August.

The August statistics lowered the Dodge Index to 171 (2000=100) compared to 182 in July, marking the lowest reading for the Index since May. Despite the month’s decline, the Index remains above its 2019 average of 167.

Year-to-date through eight months, total construction starts were 5% lower than the same period a year ago due to declines in residential and nonresidential buildings. Nonbuilding construction activity was 3% higher through the first eight months of the year due to gains in electric utilities/gas plants.

“The August decline was expected after July’s robust level of starts,” stated Richard Branch, Chief Economist for Dodge Data & Analytics. “Furthermore, the year-to-date activity continued to suggest that this year’s levels are easing back from what was seen in 2018 – essentially mirroring the slowdown in overall economic growth.”

Nonbuilding construction starts reached $217.4 billion (at a seasonally adjusted annual rate) in August, a 15% decline from the previous month. Environmental public works (drinking water, sewers, hazardous waste, and other water resource projects) fell 43% from July to August, while miscellaneous nonbuilding fell 32%. Both types of construction had shown remarkable strength in July as work on several large projects got underway. Offsetting these declines was a 10% increase in street and bridge projects. The electric utility/gas plant category also gained 9% over the month.

The largest nonbuilding construction project to start work in August was the $2 billion Permian Highway Pipeline Project in Texas. Also breaking ground during the month was the $840 million Lynwood Link Extension rail line in Washington and the $625 million Palen Solar Farm in Desert Center CA.

Nonresidential building starts dropped 3% from July to August, to $283.9 billion (at a seasonally adjusted annual rate). August’s decline was the direct result of a 66% drop in manufacturing starts, which had soared in July when the $1.0 billion Foxconn manufacturing complex broke ground in Mount Pleasant WI. Commercial construction starts rose 7% in August to $135.2 billion (annual), the result of increases in offices and warehouses. Institutional starts rose 2% in August to $138.2 billion (annual) due to increases in health and education facilities.

Through the first eight months of 2019, nonresidential building starts totaled $188.2 billion, a decline of 7% over the same time frame of 2018. Commercial starts were 3% higher year-to-date, fueled by gains in offices, warehouses, and parking structures. Starts for stores and hotels were lower through the first eight months of this year. Institutional construction was 5% lower year-to-date at $92 billion with declines evident across all institutional categories. Manufacturing construction starts were 46% lower year-to-date.

Residential building fell 1% during the month to $305.8 billion. Single family construction was 3% lower, overwhelming a 3% gain in multifamily starts.

The month-to-month growth in multifamily housing was aided by the start of a $600 million apartment complex on West 29th Street in New York, NY. Also breaking ground during the month was the $515 million Brookfield residential tower in Los Angeles, CA and the $223 million Sendero Verde mixed-use project in New York, NY. 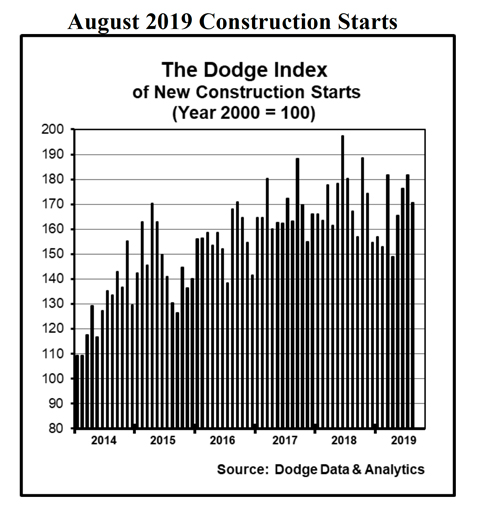 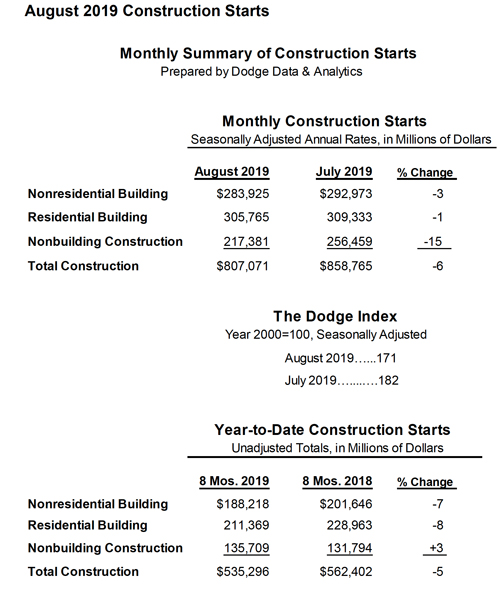