Construction Starts Down to Begin 2021

“The tenuous beginning to construction starts in 2021 highlights the long and rocky road ahead for the sector this year”, stated Richard Branch, Chief Economist for Dodge Data & Analytics. “Over the course of the year the economy will recover as more Americans receive their vaccinations. However, the construction sector’s recovery will take time to materialize due to the deep scars caused to the industry by the pandemic. Patience will be key in the months to come.”

Nonbuilding construction started 2021 with a resounding 10% decline in January to a seasonally adjusted annual rate of $168.4 billion. Every nonbuilding sector posted a decline during the month — environmental public works fell 6%, highways and bridges dropped 7%, while starts in the utility/gas plant category lost 13%, and miscellaneous nonbuilding starts plunged 17%.

Nonresidential building starts were unchanged in January at a seasonally adjusted annual rate of $224.5 billion. Commercial starts were 1% higher during the month as a sizeable gain in warehouse construction offset declines elsewhere. Institutional building starts fell 9% in January, with education and healthcare construction down sharply. Manufacturing starts, meanwhile, rose 81% due to the start of two large projects.

The largest multifamily structure to break ground in January was the $200 million DOT Block Residences in Dorchester MA. Also getting underway during the month were the $153 million Halley Rise Block D-1 mixed-use building in Reston VA and the $112 million 1400 W Randolph St apartments in Chicago IL. 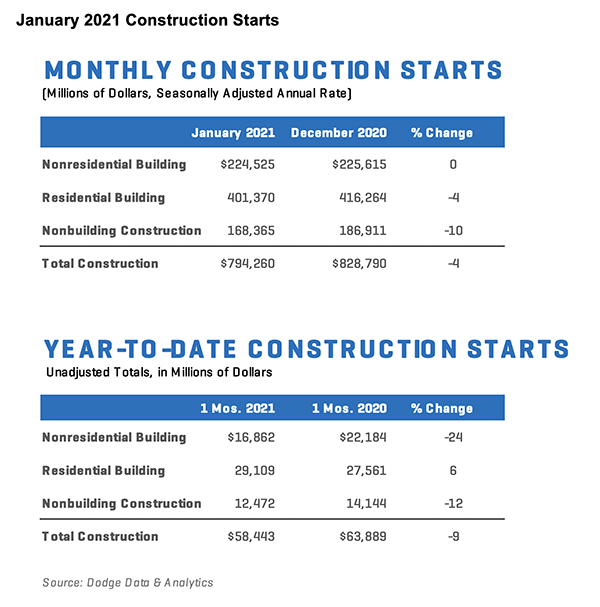 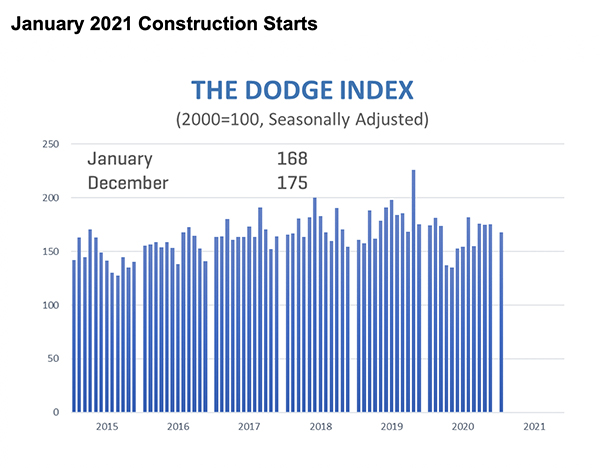