NEW JERSEY — January 19, 2021 — Total construction starts lost 5% in December, falling to a seasonally adjusted annual rate of $784.3 billion. Nonresidential building starts fell 11% during the month, while nonbuilding starts were 5% lower. Residential starts were essentially flat over the month. Starts were lower in three of the four regions in December; the South Central was the only region to post an increase.

For the full year, total construction starts fell 10% to $766.3 billion. Nonresidential building starts saw the steepest drop, losing 24%, while nonbuilding starts fell 14%. Residential construction starts ended 2020 up 4% thanks to strong single family activity. In December, the Dodge Index fell 5% to 166 (2000=100) from the 174 reading in November. For the full year, the Dodge Index averaged 163, a 10% decline from 2019’s average.

“The roller coaster year of 2020 is over, but not forgotten,” stated Richard Branch, Chief Economist for Dodge Data & Analytics. “The scars from the pandemic and recession will be long lasting and resulted in significant declines across most construction sectors. Single family housing, warehouse, and highway and bridge starts were bright spots that cannot be understated for their gains. There will be difficult months ahead for the economy and for construction starts as COVID-19 cases mount. However, the continued roll out of vaccines means 2021 will be a better year.”

Nonbuilding construction fell 5% in December to a seasonally adjusted annual rate of $185.3 billion. Declines were broad based across the sector, with highways & bridges, environmental public works and miscellaneous nonbuilding starts all falling in December. The utility/gas plant category rose 70% in the month due to the start of two large power generation facilities.

For the full year, nonbuilding starts fell 14% from 2019 to $181.5 billion. Significant pullbacks in starts were seen in the utility/gas plant category as well as in miscellaneous nonbuilding. Environmental public works starts dropped 5% in 2020, while the highway and bridge category saw an 8% increase in starts.

Nonresidential building moved 11% lower in December to a seasonally adjusted annual rate of $225.3 billion following a sizeable increase in the previous month. Commercial starts fell 23% over the month as office, hotel, and warehouse starts all posted double-digit declines. Institutional starts fell 5%, while manufacturing starts rose 59%, thanks to the largest nonresidential building project to get started in December, the $600 million Gulf Coast Ammonia Plant in Texas City TX. Also starting in December were the $341 million Orlando Health Jewett Orthopedic Hospital in Orlando FL and the $325 million University of Massachusetts Education and Research Building in Worcester MA.

In 2020, nonresidential building starts lost 24% to $239.9 billion — the lowest level since 2015. Commercial starts tumbled 26% over the year, with warehouse construction eking out a 1% gain in 2020. Institutional starts fell 13% last year, while manufacturing start dropped 59%.

Residential building starts fell by less than one percentage point in December to a seasonally adjusted annual rate of $373.7 billion. Multifamily starts posted a solid 24% increase for the month, while single family dropped 7%. 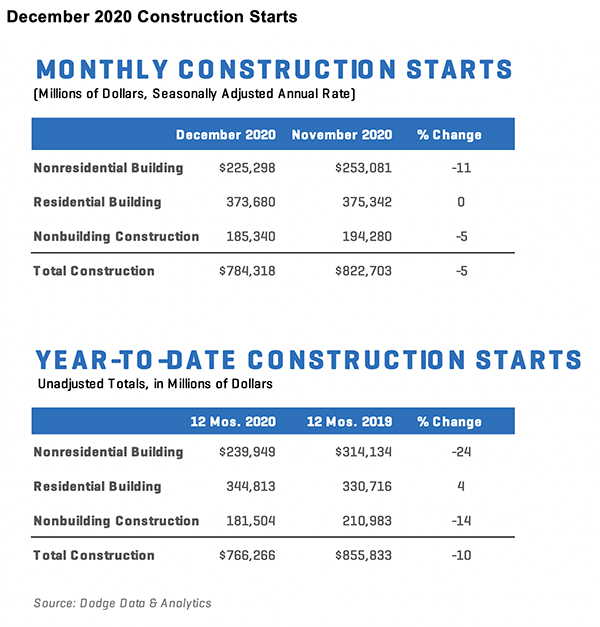 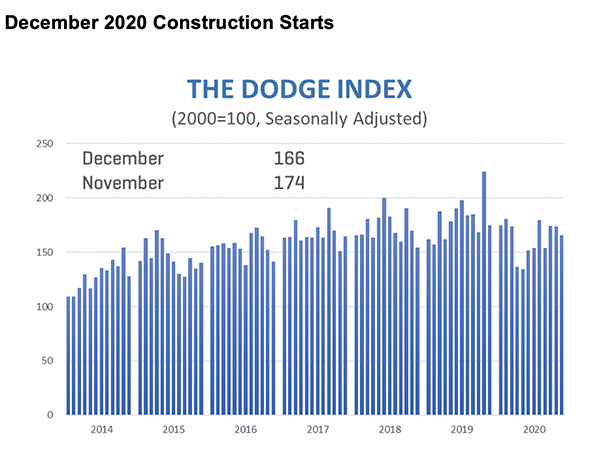