Large projects lead to gains across most major construction sectors

NEW JERSEY – December 17, 2019 – Construction starts moved 37% higher from October to November, reaching a seasonally adjusted annual rate of $988.9 billion. The large percentage gain was not only a response to a particularly weak October, but also numerous massive projects that broke ground during the month. By major sector, nonresidential building starts gained 61% over the month, while nonbuilding starts moved 82% higher. Residential building starts were flat from October to November.

November’s gain pushed the Dodge Index to 209 (2000=100) compared to the 153 posted in October. The dichotomy between the weakness in October and strength in November is startling. However, the average of the two months is 181 – not much higher than the 11-month average of 173.

“The presence or absence of large projects continues to add immense volatility to the monthly data,” stated Richard Branch, Chief Economist of Dodge Data and Analytics. “However, the underlying trend for the year remains intact – that construction starts are settling back following nine consistent years of growth.”

Nonbuilding construction increased 82% in November to a seasonally adjusted annual rate of $288.5 billion. Starts in the electric utility/gas plant led the way due to the start of a large LNG plant as well as several wind power projects. When removing the large gain in utility projects, nonbuilding starts rose 9%. Environmental public works starts (drinking water, sewers, hazardous waste, and other water resource projects) moved 51% higher over the month, while highway and bridge starts rose 18%. Miscellaneous nonbuilding starts, by contrast, fell 33% in November.

Through the first eleven months of 2019, nonbuilding construction was 6% higher than in the same period of 2018. The electric utility/gas plant category was 111% higher than a year earlier. When removing that category from total nonbuilding, starts were down 9% year-to-date. Environmental public works gained 2% over the year, while miscellaneous nonbuilding dropped 19%. Highway and bridge starts were 8% lower on a year-to-date basis.

Nonresidential building gained 61% from October to November to $366.5 billion (at a seasonally adjusted annual rate) as several large projects got underway during the month. Manufacturing starts rose 782% over the month due to the start of a large petrochemical plant, while institutional starts rose 27% and commercial starts moved 23% higher. Only two nonresidential building categories fell in November – hotels and healthcare.

The largest nonresidential building project to break ground in November was a $7.0 billion ExxonMobil petrochemical ethylene project in Gregory TX. Also starting in November was the Rancho Los Amigos South Campus $330 million office building in Los Angeles CA as well as the $296 million first phase of the Volkswagen Body Shop in Chattanooga TN.

Residential building starts in November were essentially flat when compared to the previous month at a seasonally adjusted annual rate of $333.9 billion. Over the month, single family starts dropped 8%, offsetting a 20% gain in multifamily starts. The largest multifamily building to break ground was the $500 million Calyer Place Apartment Development in Brooklyn NY. Also starting in November was the $350 million Seattle House Mixed-Use Development in Seattle WA and the $350 million Avenue Bellevue Mixed-Use Development in Bellevue WA. 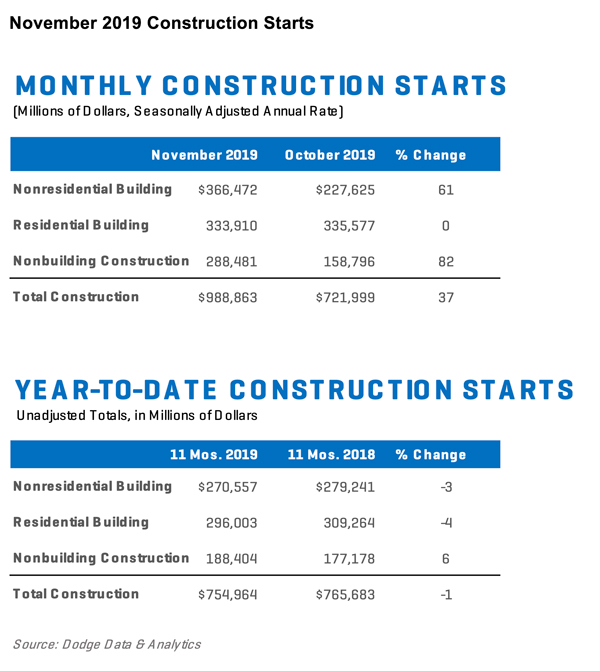 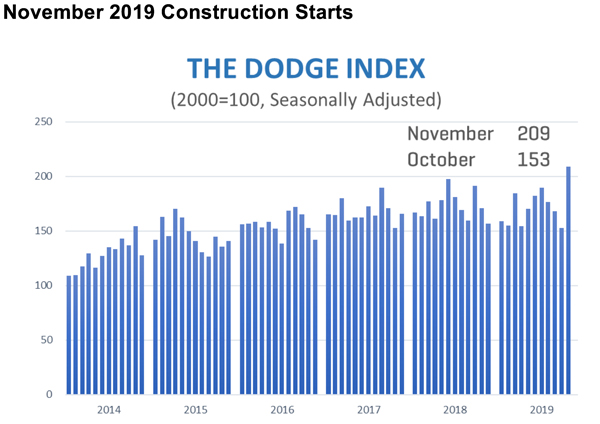