NEW YORK – February 22, 2019 – The value of new construction starts in January advanced 2% compared to December, reaching a seasonally adjusted annual rate of $722.5 billion, according to Dodge Data & Analytics. The slight gain followed the loss of momentum that was reported towards the end of 2018, with total construction declines of 7% in November and 10% in December. Each of the three main construction sectors in January registered modest growth. Residential building climbed 4%, lifted by a rebound for multifamily housing. Nonresidential building edged up 1%, reflecting a stronger pace for its commercial building segment including large office projects in Reston VA, Houston TX, Boston MA, Austin TX, and Seattle WA. Nonbuilding construction also edged up 1%, helped by the start of a $1.0 billion natural gas pipeline in Oklahoma and several large electric utility projects. On an unadjusted basis, total construction starts in January were $51.5 billion, down 12% from the same month a year ago. On a twelve-month moving total basis, total construction starts for the twelve months ending January 2019 held steady with the corresponding amount for the twelve months ending January 2018.

The January statistics produced a reading of 153 for the Dodge Index (2000=100), compared to December’s 150. During 2018, the pattern of construction starts featured especially strong activity in June and October, which was then followed by declines in the months immediately following. This led to December’s reading of 150 for the Dodge Index, which was at the low end of last year’s range of activity. “January’s slight increase suggests that construction starts are beginning to stabilize after the diminished activity reported at the end of last year,” stated Robert A. Murray, chief economist for Dodge Data & Analytics. “This is consistent with the belief that total construction starts for 2019 will be able to stay close to last year’s volume. It’s true that the rate of growth for total construction starts has subsided from the 7% annual gain
reported back in 2017, but it’s still too early to say that construction activity has made the transition from deceleration to decline.”

“In early 2019, there are several near-term positives for construction,” Murray continued. “Interest rates  have settled back from levels reached during last year’s fourth quarter, material prices appear to be rising more slowly, and the partial government shutdown was brought to a close. The federal budget deal signed into law on February 15 included a 2% increase to $45.3 billion for the federal-aid highway obligation ceiling, as called for by the 2015 Fixing America’s Surface Transportation Act. However, the benefits of tax reform on economic growth are expected to wane this year. Furthermore, the most recent survey of bank lending officers conducted by the Federal Reserve suggests that a more cautious lending stance emerged during the latter half of 2018, especially with regard to loans for multifamily projects.”

Nonresidential building in January was $245.2 billion (annual rate), up 1% following a 13% slide in December. The commercial building categories as a group rose 4% in January. Office construction picked up the pace, climbing 18%, and featured groundbreaking for these large projects – the $550 million Reston Gateway office complex (Block A and Block B) in Reston VA, the $350 million Hines office tower in Houston TX, the $225 million Amazon at Seaport Square office building in Boston MA, the $180 million Oracle office complex in Austin TX, and the $150 million Amazon Urban Treehouse office building in Seattle WA. Hotel construction in January rose 10%, helped by the start of the $245 million Westin Anaheim Resort Hotel in Anaheim CA, while the commercial garage category advanced 21%. Limiting the January increase for the commercial building group were declines for warehouses, down 13%; and store construction, down 24%. Despite its January decline, the warehouse category did include the start of several large projects, including a $95 million warehouse complex in Kenosha WI and the $90 million Savannah Port Logistics Center in Pooler GA. Manufacturing plant construction in January grew 9%, boosted by the start of a $125 million steel plate mill in Baytown TX.

The institutional side of nonresidential building slipped 2% in January. Educational facilities, the largest nonresidential building category by dollar volume, retreated 10% after surging 26% in December. Cushioning the downturn for educational facilities was groundbreaking for several large projects, including the $124 million Comal Independent School District High School #5 in New Braunfels TX, the $120 million Thayer School of Engineering at Dartmouth College in Hanover NH, a $109 million high school in Gainesville VA, and the $102 million Cape Cod Regional Technical High School in Harwich MA. The healthcare facilities category in January dropped 11%, falling for the third month in a row, although the latest month did include the start of the $175 million University of Central Florida Lake Nora Teaching Hospital in Orlando FL and the $95 million Covenant Medical Center tower in Lubbock TX. Church construction, which experienced a 17% hike in December, fell back 34% in January. On the plus side for institutional building, the public buildings category jumped 46% in January, lifted by the start of the $525 million Utah State Prison relocation in Salt Lake City UT. The transportation terminal category, which includes service facilities, climbed 39% in January with the boost coming from the start of the $365 million Croton Harmon rail service facility for Metro-North in Croton On Hudson NY, as well as the start of a $90 million airport terminal at Lafayette Regional Airport in Lafayette LA. Amusement-related construction improved 1% in January, and included the start of the $167 million renovation of the Memphis Cook Convention Center in Memphis TN.

Residential building in January was $309.8 billion (annual rate), up 4% and rebounding from its 9% slide in December. Multifamily housing bounced back 14% following its 15% December decline, and was up 1% compared to its average monthly pace during 2018. There were five multifamily projects valued at $100 million or more that reached groundbreaking in January, compared to four such projects in December. The large January multifamily projects were led by the $150 million Watermark at Brooklyn Heights senior apartments in Brooklyn NY, the $146 million multifamily portion of a $250 million mixed-use complex in Washington DC, and a $128 million multifamily complex in Oakland CA. The top five metropolitan areas ranked by the dollar amount of new multifamily starts in January were – New York NY, Washington DC, Boston MA, San Francisco CA, and Charlotte NC. Single family housing in January was unchanged from the reduced dollar amount reported for December, which itself was down 6% from November. January’s rate of activity for single family housing was down 7% from the average monthly pace reported during 2018. By major region, single family housing performed as follows in January compared to December – the West, up 3%; the South Central, up 2%; the South Atlantic, unchanged; the Northeast, down 3%; and the Midwest, down 9%.

Nonbuilding construction in January was $167.5 billion (annual rate), up 1% which came after a 9% retreat in December. The electric utility/gas plant category increased 44% in January following a weak December, and January’s level was up 2% from the average monthly pace for this highly volatile project type during 2018. There were two large solar farms entered as construction starts in January – the $550 million Wright Solar Park in Los Banos CA and a $303 million solar farm in the Bakersfield CA area. There were also two large wind farms entered as construction starts in January – the $372 million Goodnight Wind Farm in Claude TX and the $150 million Clean Energy 1 Wind Farm in the Bismarck ND area. The public works categories as a group dropped 4% in January compared to December. Weaker activity was reported for highways and bridges, down 5%; sewer construction, down 5%; water supply construction, down 22%; and river/harbor development, down 34%. The highway and bridge category did include the start of the $229 million First Coast Expressway improvement project in the Jacksonville FL area, the $202 million State Highway 146 improvement project in Pasadena TX, and the $169 million Chelsea Bridge improvement project in Chelsea MA. Limiting the public works decline in January was a 20% increase for miscellaneous public works, which includes pipelines and mass transit rail projects. Boosting miscellaneous public works in January was the start of the $1.0 billion Midship natural gas pipeline in Oklahoma.

The 12% decline for total construction starts on an unadjusted basis for January 2019 relative to January 2018 was due to decreased activity for each of the three major sectors. Nonresidential building dropped 12% from a year ago, with institutional building down 18% and manufacturing building down 38%, while the commercial building segment ran counter with a 2% gain. Residential building fell 13% from a year ago, with single family housing down 13% and multifamily housing down 11%. Nonbuilding construction descended 10% from a year ago, with public works down 13% while electric utilities/gas plants moved in the opposite direction with a 6% increase. By major region, total construction starts for January 2019 relative to January 2018 showed this pattern – the South Atlantic, up 2%; the Northeast, down 10%; the South Central, down 11%; the West, down 12%; and the Midwest down 33% from January 2018 that included the start of the $2.0 billion NEXUS natural gas pipeline in Ohio and Michigan. 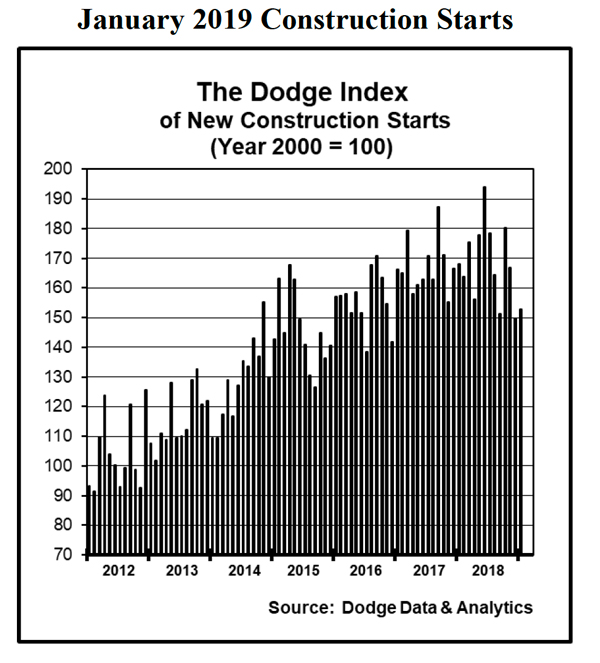 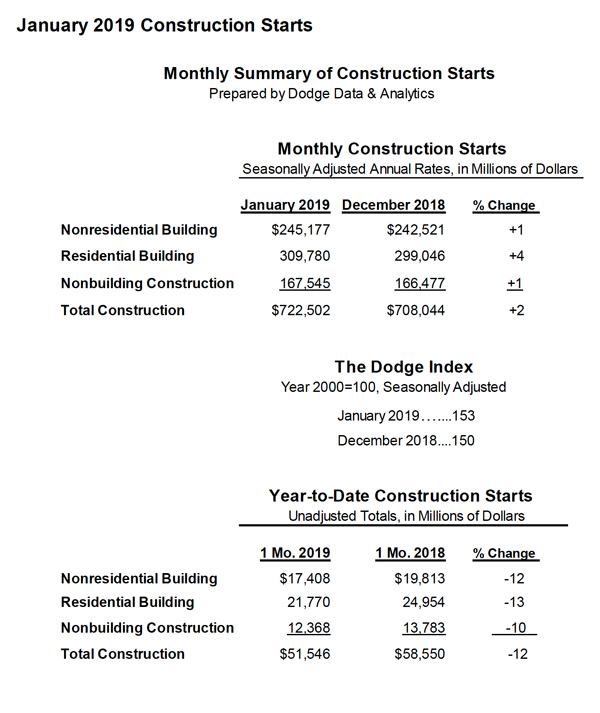