The COVID-19 pandemic forced contractors to rethink policies, procedures and protocols to keep workers safe and to meet the requirements of cli­ents and health officials. With vaccinations helping to bring down COVID cases, workplaces are return­ing to what would have been considered “normal” prior to the pandemic. However, after more than a year of testing new ways of working, some civil contractors have seen successes borne out of their pandemic strategies that they expect to adopt permanently.

One of the most prevalent changes during the pandemic was the use of video conferencing and collaboration tools such as Zoom and Microsoft Teams. With offices shutdown and many office employees working remotely, contractors adopted these tools to keep connected with staff, partners and clients.

Still, Myers says his company is trying to deter­mine when virtual meetings are the best option versus in-person meetings. He says the company still favors in-person interactions, but when travel is involved, virtual may make more sense. “We prefer to be together, but certain meetings require managers and field superintendents to come from hours away,” he says. “That’s a situation where we can use Zoom or Teams. It’s an efficiency that I think will stick around.”

Myers notes video conferencing is often more efficient because it keeps people more focused. “There’s really no chitchat on Zoom,” he says. “In-person banter can be good from a cultural stand­point, but there are times when we just need to focus.”

Lane Construction has also seen the benefits of using video confer­encing in place of some in-person meetings, saving time and travel expenses for both the company and its employees. “A key take­away for us was that before [the pandemic] employees did a lot of travel,” says Lauralee Heckman, company spokesperson. “We real­ize there are meetings that can be done successfully virtually. We don’t have to travel as much, and we’re able to give our employees a little more time at home with their families.”

Virtual meetings—especially with employees who work remotely from home—also changed some cultural aspects of the firm. When employees worked at home, most dressed casually. “We even had clients who would meet in baseball hats and T-shirts,” she added. “Since then, we’ve definitely relaxed our dress code. We still look professional, but we’re more relaxed about it. I think that generally speaking, it’s made people feel more at ease and comfortable.”

Many firms found that video conferencing also served as a first step toward a broader and deeper engagement with technology. “We’ve been forced to learn the extent of what these tools can do and now we’re really rolling with it,” Myers says. “It’s inertia—you just keep rolling, until you’re forced to change direction.”

A few years ago, Allan Myers equipped all of its field managers and superintendents with iPads. When the pandemic hit, those tools gained even greater importance. “Everyone knows how to use Teams on their iPads now,” says Meyers. “They know how to share files and where to go for documents. They know how to get real-time reporting on crew costs and job costing. We had already started the push toward use of Power BI and dashboards, but everyone has really leveled up their skills.”

A few months before the pandemic forced shut­downs, Allan Myers had also launched an internal social media app as a way to help stay better con­nected with employees. At the time, about 75% of employees didn’t have a company email address. “[The app] gave us a direct connection with every employee to communicate daily and multiple times a day on updates on what’s going on—and it remains an integral piece of our communication strategy,” Meyers recalls. “The pandemic has helped us up our internal communications to a level far beyond what it was before.”

Another important element in the move toward greater technology engagement during the pan­demic was an increased level of adoption by clients, says Dan Smolilo, director of process and innovation at The Walsh Group. During the pandemic, Smolilo says the company leaned on field management tools like BlueBeam, Procore, PlanGrid and BIM 360 to better document field data and improve collabora­tion with its partners. “You’re seeing a real shift now with owners,” he says. “We’re now talking with cli­ents who are looking at doing digital twins. It’s pretty exciting to see that they want this.”

Smolilo shares that the use of drones for photogrammetry has gained significant traction. He notes that drone technol­ogy has advanced rapidly in recent years while also becoming more affordable.

On a current interchange project for PennDOT, where the scope involves cutting into a hillside, the owner requested regular communication on quanti­ties. “We use drones to take weekly site production photos,” he says. “Traditionally, by the time you’d survey all of that, a week has gone by, but now we’re able to leverage drones to do that quickly.”

On another project near Indianapolis, the company is using a Lidar attachment on a drone to collect data faster than with traditional methods.

“It’s all about reality capture—being able to cap­ture the ongoing process and procedures to allow owners to be part of the conversation,” he says. “They can see things, without being onsite or even stepping out of their bathrobe in their apartment, if they want.”

Given concerns around infectious disease during the pandemic, companies also put a greater emphasis on its health and safety protocols. While COVID cases today are well below the winter peak, heightened awareness around health and hygiene remains, says Lauralee Heckman, spokesperson for Lane Construction. “Whether you’re working from home or the office or the jobsite, that [awareness] is ingrained in you,” she says. “The clean­ing of our offices is definitely enhanced, and there are hand sanitizer stations that will remain everywhere.”

On Allan Myers jobsites, portable handwashing sta­tions are standard and disinfecting wipes are now stock items, says Sandra Genter, the company’s HSE director. “Wiping down equipment between shifts with different operators and workers is just good prac­tice,” she says. “That will stick around.”

Genter says managers and employees have generally changed their mindset around their own health as well as the health of their coworkers. “People are more willing to ask, ‘You look like you’re not feeling well. What’s going on?’” she says. “In the past no one would ask that. Now it’s at the forefront of people’s minds. It’s a more proactive approach.”

During the pandemic, elements of the company’s training programs also moved to a virtual environment. Instead of bringing large groups of workers together, the company may have an instructor teach a course virtually to smaller groups of employees in various locations. Each local session is proctored by an in-person health and safety professional. The company has used virtual learning for First Aid and CPR training as well as rigging.

“For our previous rigging classes, we’d load them up with 15 or 20 people,” she says. “With these satellite sessions and smaller groups around the regions, we could still conduct that training with minimal gathering and transportation.”

This article was published originally in The Civil Quarterly, 2021 Issue 3. The Civil Quarterly is a free, quarterly publications that offers research, interviews and feature articles on trends transforming the civil construction sector. 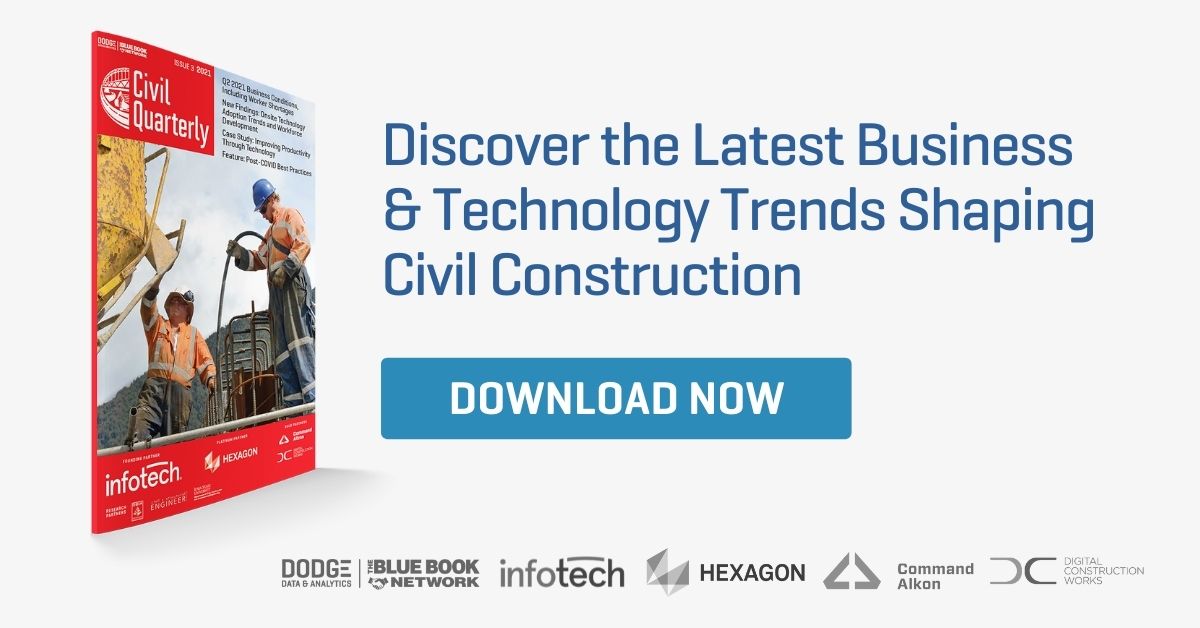