With only two months of data available for 2020, it is difficult to ascribe a 2020 trend. However, some perspective can be gleaned by examining a 12-month moving total. For the twelve months ending February 2020 total construction starts were 3% higher than the previous twelve-month period. By major category, nonresidential building starts were 3% higher, while residential starts were up 1%, with nonbuilding starts increasing 7%.

“The good news is that heading into the coronavirus pandemic, construction starts were stable. The economy was healthy fueled by continued steady job growth,” stated Richard Branch, Chief Economist of Dodge Data and Analytics. “Of course, the pandemic’s effect on future starts is as yet unknown. Construction firms will need to deal with multiple issues including supply chain disruptions, workforce constrictions due to the outbreak, and an economy that has moved from a pace near its long-term potential to a virtual stall within the space of a week. Over the next few months, many construction projects could see delays in start or longer times to completion based on shortages of supplies from China or a reduction in available labor due to spread of the virus. Still others may begin to see projects cancelled outright due to a sudden circumstantial change in demand. Planning data as reported to Dodge Data & Analytics will be watched closely to see if fissures are developing in the construction sector.”

Nonbuilding construction starts moved 9% lower from January to February, dropping to a seasonally adjusted annual rate of $148.8 billion. The drop in February was the result of a 17% decline in the highway and bridges and a 22% drop in the utility/gas plant category. However, gains were seen in the miscellaneous nonbuilding category and environmental public works, which rose 14% and 1% respectively.

The largest nonbuilding construction project to break ground in February was the $531 million Juno Solar Project in Borden County TX. Also starting in February was the $500 million Big Raymond Wind Farm, which is spread over Hidalgo, Willacy, and Cameron Counties in Texas as well as the $406 million Pryor Mountain Wind Farm in Bridger MT.

Nonresidential building gained 7% in the month of February to $285.9 billion on the back of several large projects getting underway in the office and healthcare sectors. February’s commercial construction starts rose 7%, while institutional starts moved 13% higher. Manufacturing starts by contrast fell 27% in response to several large projects that broke ground in January. 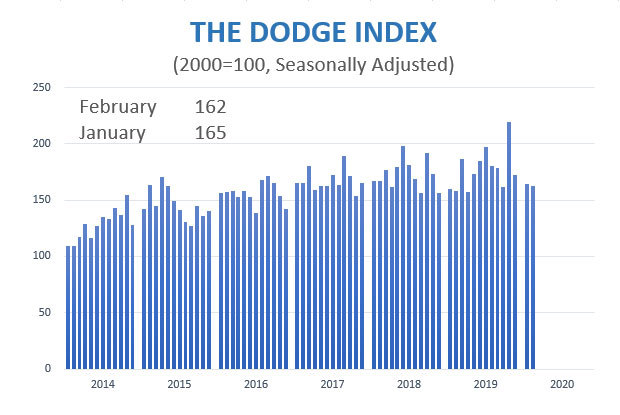